My breed is called a Munchkin. We're cats that have short legs, just like a little wiener-dog. Just because we have stubby legs doesn't mean we can't jump! We just can't jump as high as a normal cat with longer legs. I could jump onto the kitchen counter if I really wanted to, so don't tell my mom and dad! I jump onto the windowsill in my bedroom all the time, but sometimes I miss and fall down. That's very embarrassing for a cat.

The first official Munchkin came around in the early 1980's in Louisiana, USA. My short legged ancestors aren't anything new to the cat world, but to the humans we were quite unique. The original Munchkin, named Blackberry, had a few short-legged kittens. Those kittens grew up and had babies of their own, and now there are lots of us stubby legged cats! All thanks to Great² Grandmother Blackberry.

Mommy Munchkins can have short legged and normal long legged kittens. The special trait that makes us all short legged is sneaky so as long as one of our parents have the short legs, there's a chance that the babies will have short legs too. I've been "fixed" so I can't produce any babies. Sorry lady kitties, my cuteness stays with me! 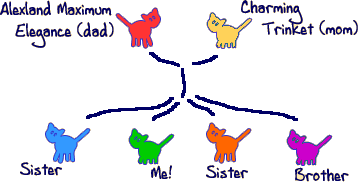 Now a days we can even be entered into cat shows, which wasn't always the case. Since Munchkins are a fairly new breed compared to the Siamese or Persian, a lot of the public doesn't know we exist. When my Mom has to go buy cat food, the cashier always inquires as to what kind of cat she has. When Mom tells the cashier that she has a Munchkin, the cashier always giggles and thinks my mom is just describing my personality. Mom always has to stop and explain that Munchkin is an actual cat breed. That usually confuses the cashier because he (or she) has never heard of us before.

I'm just an ordinary house cat, so my purebred paperwork says I can't be shown in cat shows. That's okey though, because I'm too scared of all those other humans and cats. I wouldn't want to leave my show cage! *shiver*